I learned about hard links in *nix the other day and its changed my life.

Sometimes you want a file in more than one place so you copy it. Since we’re talking *nix you cp, rsync, cat > out, or whatever. But that is lame because now you’re storing the same data in two places. LAME!

If you came from windows this is when you say “oh, I can just make a shortcut!” but shortcuts are lame because they break all the time. There’s something better to do!

This is the link command. It will make the file appear in two places at once without actually copying the data. Delete file1 and file2 still exists, no data was actually deleted. The data won’t be deleted until you delete both file1 and file2.

Tonight I listened to a This American Life segment about the artisanal toast craze and it was totally unexpected. Instead of a story about hipsters and the silliness of $4 toast we got an intimate look at the person that kicked off the trend.

Her name is Giulietta Carrelli.

The podcast is based on an article by John Gravois, you can read it here.

This isn’t a story about toast after all, its the story of a mentally ill woman on her quest for stability and life. Please, read the whole piece but here’s why I’m talking about it: Giulietta has schizophrenia and it sort of comes on in episodes where she can’t think, can’t focus, hears voices, is overwhelmed by the world, and just plain becomes dysfunctional. She wandered for a long time. Losing relationships. Losing jobs. Until finally she starts to find a few things that help her out of her episodes. One of them is talking to people, having them recognize her.

She started a coffee shop a few years ago and she walks the same route everyday to work. She makes sure to introduce herself to anyone living in the neighborhoods she passes through. She warns them that sometimes she can get lost and she would really appreciate help if that happens. When she does have an episode she knocks on people’s doors, asks them for help, and gets directions.

Her crazy appearance (seen above, and she wears the same outfit everyday like a uniform) isn’t about making some kind of statement. It’s about being recognized. When people call out her name and say hi it snaps her out of her episodes; gets her back in reality.

It’s late, and I haven’t fully processed it yet. But there are a lot of really inspiring things in this story and now I’m putting that inspiration into action.

For the next 365 days I will blog everyday.

What does this have to do with the story I just told? I’m not sure, but maybe with a few hundred blog posts I can figure it out.

Move lots of files using rsync for fun and profit Yeah, you're a total hacker.

I needed to backup my large collection of cat pictures today and realized how big of a pain moving 2TB of files is using the usual terminal copying tools. Luckily, moving around lots of files, and lots of large files, via terminal is really easy using rsync. Rsync has some nice tricks up it’s sleeve. It can perserve permissions, compress files on the fly, and do some filtering as it copies. Oh yeah, and if it’s interrupted you can always resume, unlike commands like cp, dd, and mv. END_OF_DOCUMENT_TOKEN_TO_BE_REPLACED
Move lots of files using rsync for fun and profit
Posted Friday, April 13, 2012
4 I love the internet and I’ve always hated internet filters because they block stuff erroneously. However, I do try to avoid certain types of material online and so I’ve done a little work to make sure that I don’t see anything I don’t want to see. Here’s what I do along with some other options.

As a side note, anyone that knows me knows that I hate censorship in a government. What I’m trying to help people do is filter out the content that they personally don’t want to see. I would never impose censorship on anyone. END_OF_DOCUMENT_TOKEN_TO_BE_REPLACED

I’m diverting from my normal fare to work on a study guide for my History 1700 Midterm.

The book used is “The Enduring Vision: A History of the American People Concise 6th Edition”

Guide after the bump

END_OF_DOCUMENT_TOKEN_TO_BE_REPLACED

What is a Magical Zombie?

Magical Zombies are zombies that have been created by wizards, witches or other people that play Magic the gathering. The are unique in that they generally aren’t contagious, so when they bite someone they won’t become a zombie and they have no grounding in the physical world. Take a look at the examples if you don’t get what I mean:

The most comedic of all zombies

You may have noticed from the movie list magical zombies aren’t exactly the biggest threat on film makers minds. They are however very unique and should you ever run into them it’s important to know how to fight them and survive!

After you’re done laughing because magical zombies are totally weak take a moment to realize that guns won’t stop them. Even if you blow their head off they’ll keep coming. Even if you chop their limbs off, all you will do is create five parts that are trying to kill you…granted they don’t have much leverage.

Your real goal should be to get out of the area effected by zombies. Stock up on molotov cocktails but remember that anytime you use them whatever building you run into will probably start on fire. Flame throwers are great too and you can make them from scratch!

Shotguns are good too because they won’t end up starting you on fire and they still help slow the zombies down.

That’s easy, just find the shmuck that rose those zombies from the dead and kill ’em. It might be difficult because they’re magic but it should be easy because they’re total wimps that play Magic: The gathering.

Just remember, if Scooby Doo can survive a Magical zombie attack, you can too.

What is a biological zombie?

A biological zombie is the most popular current incarnation of zombies. These are zombies that are created through the spread of a virus, generally created by man, or other biological factor that physically changes a human into a zombie using science.

Movies In which biological zombies are used

So you woke up one morning and all of the sudden there were zombies kicking down your door trying to devour your flesh. Time to break out the old firearm and defend yourself. What’s that? Don’t have a firearm? Your liberal ass probably doesn’t deserve salvation, good work trying to make guns illegal for the entire time you weren’t undead.

Many of you may be familiar with Maslow’s Hierarchy of needs as well you should be but that scale changes significantly in a zombie attack. Observe the modified pyramid: 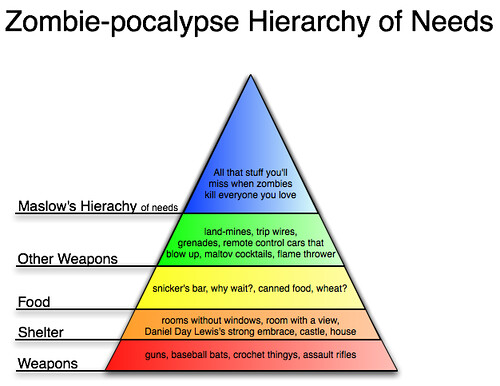 I kid I kid! But seriously, you might be better off.

Start off by securing your immediate vicinity or leave. You need time to think dammit! Can you fortify your house? If not get the hell out of it. The last thing you want to do is get trapped in a corner where you won’t be able to get out. Remember this hard fast rule: Whenever you’re stuck in a corner zombies will attack!

You need weapons, it doens’t matter how careful you are, you will always need weapons (unless you’re in a bomb shelter a la Matinee) and even then you’ll probably need them.

If you don’t have guns you’ll need to get some, K-mart is almost worthless because they stopped carrying most ammunition. Thanks to that kid that Michael Moore manipulated you’ll have to go to gun stores, wallmart or pawn shops. Congrats, if you have to go to those places you’re probably dead. Be a boy scout and load up on zombie shooter’s today, before you need them! Copy my setup if you need some ideas.

Oh yeah, special note, if you live in England or any of the other countries that made guns illegal you’re probably screwed.

The real plan has to be personally made, something that fits your circumstances. I made my first zombie plan when I worked in a mall. We knew that there was a sporting goods place in the mall so we could get guns, there was also a super target so we had food. The trick would just be to secure the borders to keep Zombie’s out. Now my situation has changed dramatically and I wouldn’t go near the mall. 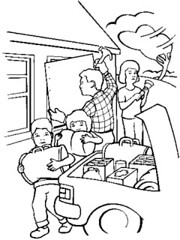 Sit down with your family and come up with escape routes (to get away from zombies), code words (to verify they’re not a zombie) and procedures for slaughtering anyone if they get bit.

Ask your questions and we’ll make sure you get the answers you need before the biological zombie’s attack!

This past weekend I met my niece for the first time. She’s one of the most beautiful things I’ve seen, so innocent and so cute. As I looked down into her bright blue eyes all I could think was “How will you survive the future? How will you know how to fight off zombies?”

Unlike most guides which only cover one type of zombie eventuality I will be covering every kind of possible zombie attack. Everyone knows there are three types:

So stay tuned for some updates and remember there are two kinds of people in this world: Those with a zombie plan and those without. Who would you rather be?

Things to know when dealing overseas (specifically in Italy):
1. Always keep your receipts: Many vendors print your complete credit card information on receipts and they may later try to charge you for things you already paid for.

2. There is no better business bureau: Not that the BBB is super effective but it does carry a certain amount of weight. If you rent from an international chain you are at least guaranteed to have local options when making complaints.

3. The mentality is snatch and grabs: In most tourist spots (especially in Italy) the mentality is that people are going to only come once so you may as well screw them as much as you can when they do come. They don’t think of repeat customers.

4. They will steal your car: This one may seem confusing. Here’s what happens, you rent a car, they steal it back at night and then charge you the insurance deductible. Use a club or something. Make sure your stuff is locked up tight.

Read more about some specific experiences:

The End of New Band Day

Well, I’ve decided to kill new band day. Not because I didn’t have more to write about but for some other reasons.

That sounds really impressive I know. Jon, thanks for asking me to join your cool indie music club and making me look impressive. At some point I’ll come to you and say

“Hey, you see that chick there? She digs me because I’m an indie music reviewer on shepizzle. Thanks bro.” I can imagine it now, you’ll say “wow, find a less shallow girl.” Finally, I’ll respond “No thanks, she’s hot.”

Until then, check out my latest, and so far only, additions.