Power Misused or How spiderman relates to the internet

We’re all familiar with the famous words of Ben Parker.

When remembering these words I can’t help but think of Google, the “do no evil company.” 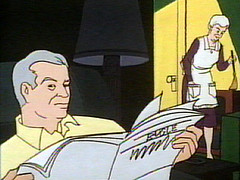 Ben Parker enjoys his “damn paper for once”

They do have a great responsibility but imagine all the fun they could have if they stopped taking their responsibility seriously. It would be even better than Emo Parker trying to act cool in a jazz club (seriously, wtf was that all about?)Google could do all kinds of things to make the internet more interesting. You ask how they will accomplish that? It’s simple, Google rewards different behavior and all of the sudden everyone wants to do whatever it is that google rewards!

Introducing: How Google can make the Internet more interesting

Imagine, instantly all the SEOs would rush to put animated gifs all over their sites. It would throw the internet back to it’s hayday, circa 1995, when that kind of thing was totally acceptable, nay, totally tubular.

Now days kids all have to have their lastFM and their pandora or yahoo music, or even their “itunes” so they can enjoy music while they surf the web. If embedded audio became hip again then we wouldn’t need silly music players anymore because each and every website would have it’s own unique soundtrack! Recently gthing did a post about how to find good music but if Google would just reward embedded audio we would all find more of it every day just by surfing the web!
An added bonus could be if their were multiple pieces of audio that would load simultaneously. Then you could discover all kinds of music at the same time

If Google’s algorithm looked at how contrasted the colors on a page were we would get all kinds of web design gems! Most pages would be black and white strict with no gray but other pages would venture out into other contrasts, strict red and green combined with flashing text and embedded audio! Wouldn’t that be awesome!?

Come to think of it Google doesn’t have to do anything to inundate the internet with insanity. Myspace already did it. (Warning:The previous link may cause bleeding from unexpected orifices