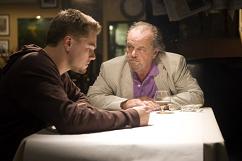 Movie night was another success despite the cosmic disruption that we call Valentines Day. Today being in my opinion the worst day of the year, I had a surprisingly good time. We started with a great Baked Pasta Shells recipe that Dan and I sort of just made up. Then after dinner everyone chatted and we even got a rendition of Tree Boy going on, I have to say that while it is fun, it is not quite as exciting if everyone isn’t willing to sing. Finally we left for the theater, on time for once I might add and everyone got tickets for the show, well almost everyone, I have been noticing a high attrition rate between the white house and Movies 8.

In South Boston, the state police force is waging war on Irish-American organized crime. Young undercover cop Billy Costigan is assigned to infiltrate the mob syndicate. Colin Sullivan, who has infiltrated the police department as an informer for the syndicate, is rising to a position of power in the Special Investigation Unit. When it becomes clear to both the mob and the police that there’s a mole in their midst, Billy and Colin are suddenly in danger of being caught.

This film is good but not great. The story line had major potential but instead of spending money on developing it they through it all into big name actors and flashy effects. Honestly the dialog was un thought provoking with the F-bomb alone being dropped 237 times. Then the story ends in the worst way possible. Trying for a “shocking” or “mind-blowing” ending they added another mole to the mix and in less then a min everyone dies. Now if that was how it ended I think the movie would have been much better but then they continue to drag it out and try and give you another “twist” by killing off the main character in a random act of premeditated violence. But after the shocking second mole this little twist left you wishing the movie had ended five min ago.

Bang for our Buck: 3 Bangs