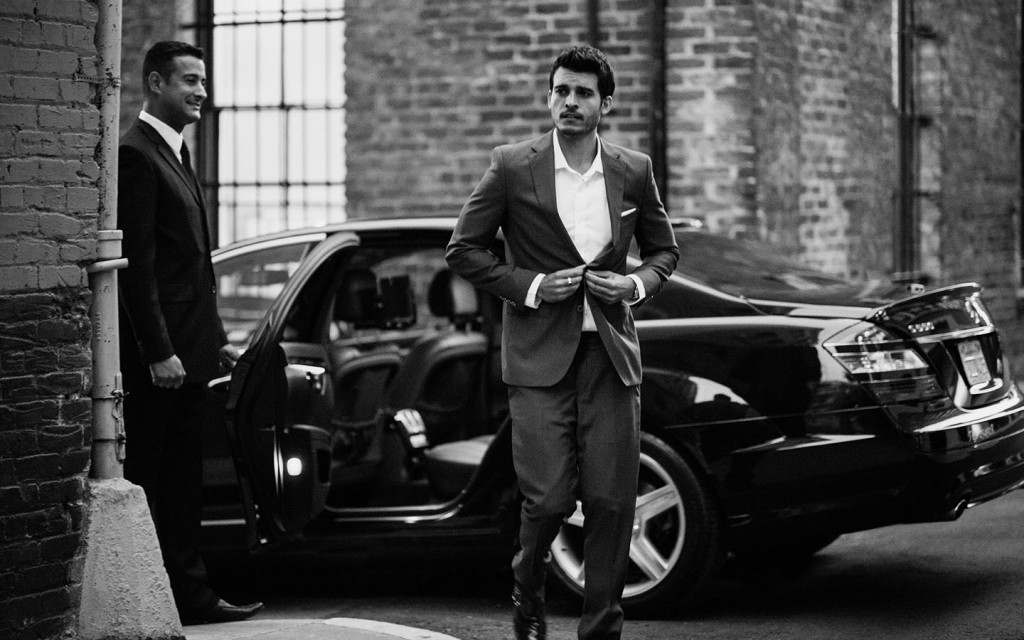 I first took a ride in the black car which was nice. After that I stuck to Uber-x, the cheaper service. I talked with each of my drivers about their experience and without exception they all raved about Uber. One man told me he had been a mechanic his whole life but with a sore back and knees he had to give it up. He said he was thrilled to get with Uber making around $60,000/year to drive around. He writes off his miles, Uber doesn’t pay for them, and in a Prius that turns out to be a pretty good deal.

All of my drivers dressed nice, had exceptionally clean new cars, and were unfailingly polite.

The Uber app on the other hand is a bit confusing. 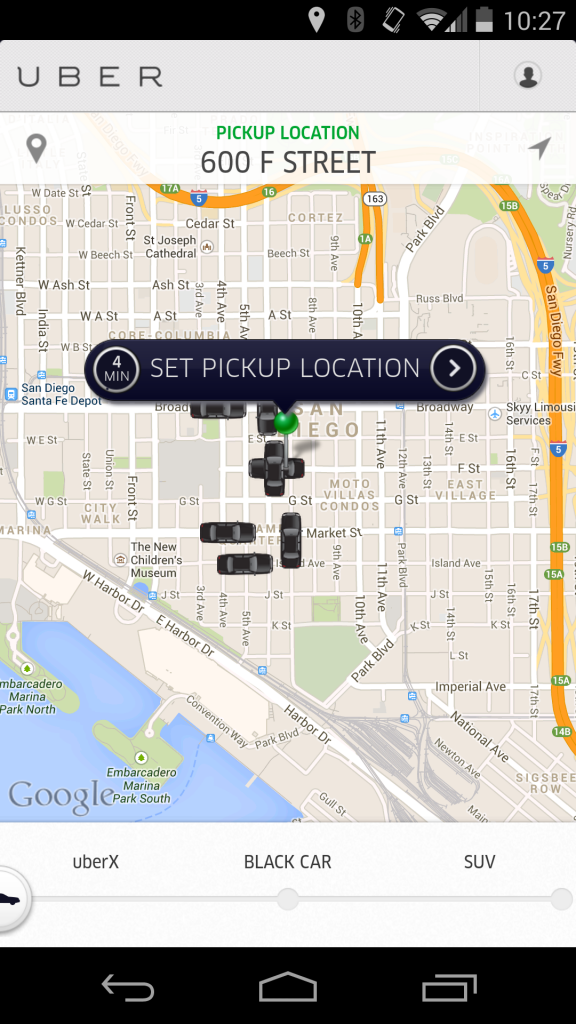 Setting pickup is straight forward enough. The pin stays centered no matter what you do so to set the location you have to drag the screen to center on where you want the car to be. That can be a bit wonky, I’d rather just tap and it would be nice if I could set which side of the street I’m on. 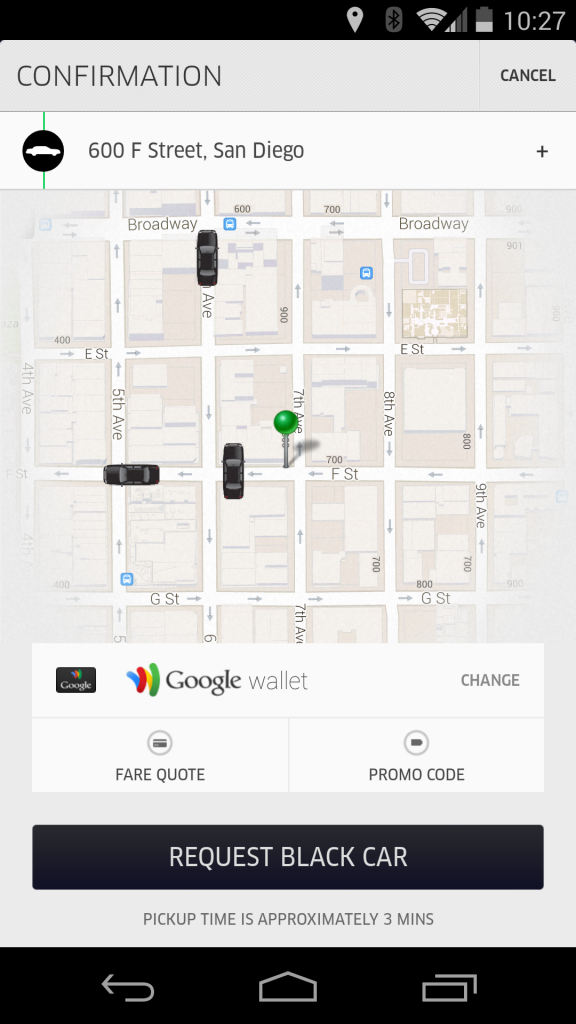 I fiddled with this for a while before getting my car.

After setting a pickup location this is the next screen. As a new user I was confused because I thought I would set my destination. One of the advantages is knowing how much it costs right? I fiddled with this for a while before getting my car. I did a fair quote which gave me the estimate but none of my drivers ever saw the destination I set even though its available to them through there app. 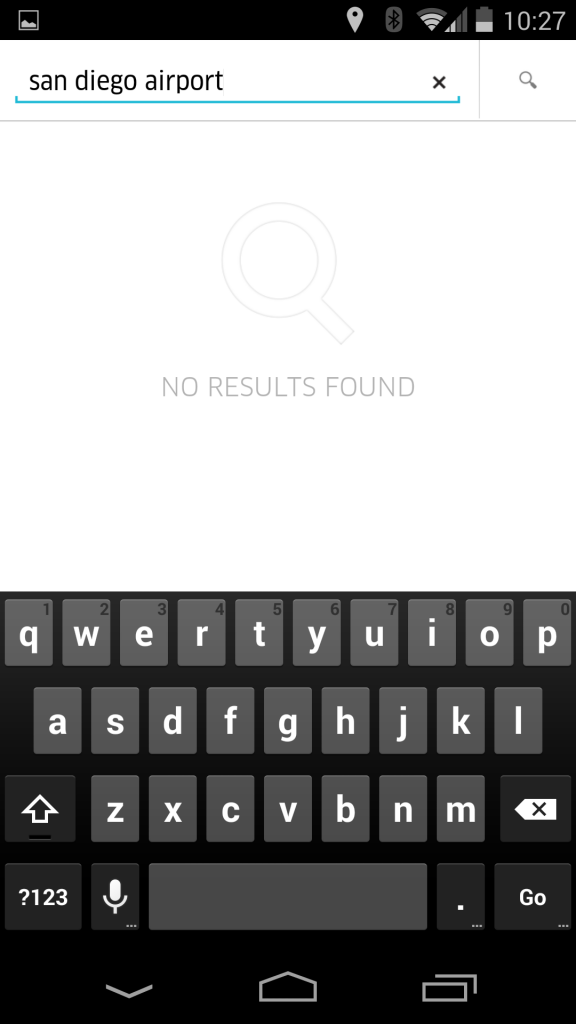 Searching for the dropoff location

I’m so used to live search that I thought the app was broken here. How could it not know where the airport is? You have to tap the search icon or go on the keyboard to get it to actually search. The no results found is for a live search of nearby locations. Why would I want an estimate to a nearby location? I’m at a nearby location and I don’t need a ride to get there. It would probably be ok if instead of showing “no results” it gave a “tap to search” or something. 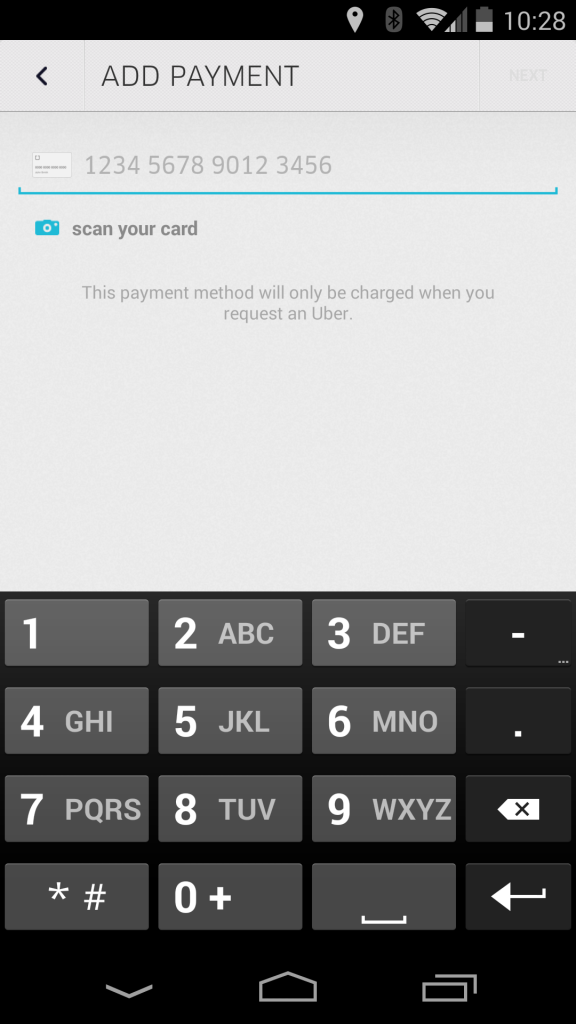 Where’s the save button?

The first time I setup Uber this wasn’t an issue because I logged in with Google and set Uber to use Google Wallet. When setting up my wife’s phone I used the scan credit card feature which worked great. After the scan I was kicked back to a screen just like this. What to do? Clearly I don’t want paypal. Where’s the save button? Its the grayed out next button in the top right which on my phone was very small and in the glare of sunlight totally invisible. Finally I realized that it was missing a CVV number and after setting it the button because slightly more visible.

Just make a giant button below. Searching for this top right nonsense is silly.

I’d love to be able to set the destination ahead of time so when the driver picks me up they can say “We’re going to X?” and I can just say yes. With addresses this would be especially useful as I don’t always have them in my head or readily available after loading bags, etc, into the car.

Several times I had drivers call me to ask where I was which was a very cool feature but would be less needed if Uber showed my GPS location as a pin in their own app. Twice the car got there a minute before Uber projected and I saw the car drive by while I was still walking to the pickup spot.

For any complaints or issues I’ll go Uber everytime now. It’s so much better.